skip to main | skip to sidebar

I'll still keep this blog up, just so you can come back and read past entries. See you at the new blog site.

Put these together on http://www.onetruemedia.com/ last night, and after I got to bed at 6 am... and up by noon, I spent the rest of today putting these together for you all. Hope you enjoy.

Here is a video of my collection of bronzes, available, in galleries. I want to take this opportunity, to thank Stellar Art Publishing, all those who believe in me there. I want to send my love and respect to all the galleries that show my work. A special love I have for all who have taken hard earned treasure and bought one of my works of art. Without all of you, I'd be a printer, or a ditch digger, or a vagabond and a rake... Love you all. The following videos are my way of giving all of you a party. Thank you so much.

Creation of Cheyenne Courtship. I started this one during the last part of 2007 and took it to the foundry in early part of this year.

Creation of Sacajawea started near the end of March of this year.

I know this isn't all that I did this year, but I need to stop now. I'm seeing double.. lol.

Happy New Year everyone. Hope everyone enjoy amazing health and happiness this coming year. If you make a lot of money, accept it, and move on.. haha.

Posted by Artist - David Lemon at 2:27 PM No comments:

Here are the photographs of Iron Horn in the Mountain Trails Gallery. There are areas of minor damage. 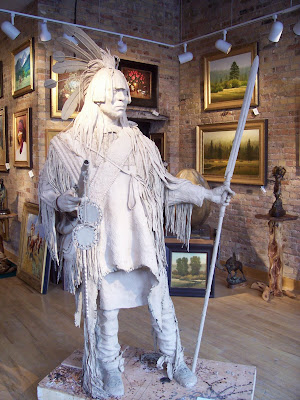 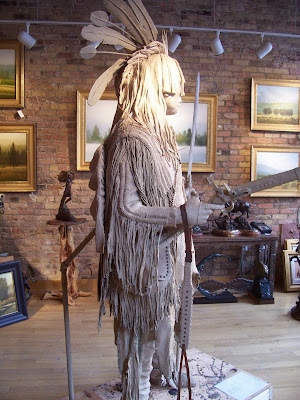 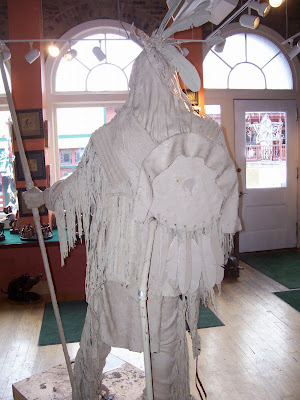 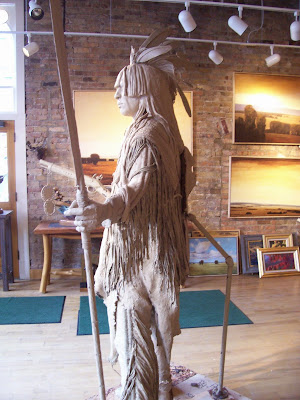 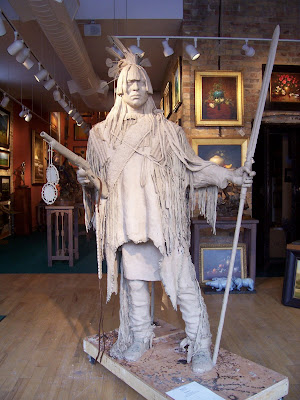 A Video Update on Iron Horn

Posted by Artist - David Lemon at 4:56 PM No comments:

Just a short update. Adonis Bronze had the clay of Iron Horn standing up within an hour of me being there last Friday. They would have taken him up to Mountain Trails Gallery today, but it's snowing very hard, so they're going to put that off for a couple of days. I'll add photo's if the foundry sends me any.
That's it for now.
Posted by Artist - David Lemon at 9:10 AM No comments:

Check out this video I submitted to YouTube. It covers everything from the 11th to this morning, with comment boxes to explain things more clearly. It's a condenced version of the past 4 days. http://www.youtube.com/watch?v=qO6-c02grcE

Check back next week, and I'll update the progress as well as what happens to Iron Horn.

P.S.
It's Sunday morning the 14th. From what I've learned from Adonis Bronze, the day I dropped off this clay for repair, and from the UHaul guy here in town, as well as thinking about all the factors of this trip, I've come to this conclusion.
from what I've found out, from this experience, through the Board of Inquiry in my Mind, the whole thing was doomed to break no matter what I would have done. The extreme cold here caused a change in the clay, wax, and foam's make up. Combined with the terrible roads and the lack of weight in the back of the truck, it was bound to break... I'm just very lucky it didn't break more.
When I built the frame I was building it for the lightweight sculpture it was. I mean it only had a little over a 100 pounds of clay spread from the feet to the head. Most of the weight, probably 40 pounds was in the head alone. The frame I made would have held it all up fine. The large amount of wax from the string laying on the board would have been enough to hold whole thing to the base and should have given plenty of support for the ankles. But single digit cold, as it sat in the back of the truck over night, caused the wax to become very brittle. It broke easily away from the board. With the bouncing of the truck, due to the lack of any kind of weight in the back of the truck, well it just put to much pressure on the ankles, once the wax, that had been glued to the base broke it's bond, was just to much, so the ankles cracked. This put way to much pressure in the wrong direction on the flange holding the support pipe down to the base, and it tore out. Once that happened the supports were pushed up and they collapsed.
The foundry is going to put pipe, welded to a plate on the base and set the legs and the clay down onto that. So that the pipe will be inside the legs. But that will only go up to the knees. So now the knees will be the weak point. Even if it had stood up, in the back of the truck, the foam would have crumbled at the ankles or in the legs from the weight above it.
I know how I'll frame it next time and how I'll support it, next time. But I would be hard pressed to be talked into transporting it ever again 400 miles... 50 miles would be fine but 6 hours of bouncing isn't good.
Sorry, long explanation... lol I did what I did, with the knowledge I had at the time. I'm just very thankful that the damage wasn't worse than it was.

Iron Horn - Monumental - A Lot of Grunting and Wheezing

Finally have the Clay loaded and ready for the drive tomorrow to Utah. What a total relief to have it packed away for the night.

Well that's it. I'll take video of the trip. When I arrive back home Friday, I'll put them on the blog. So check back on Saturday morning or afternoon.

I'm going to do some major cleaning both at my studio and home. I've let all that sit by the wayside for far to long because of the deadlines I had to meet on clay. I am going to take the rest of this month off and just gather my strength for the projects to come.

Hope you've enjoyed this past years creations. Would love to hear from you. So email me at mtlemon@gmail.com See you in January 2009. Can you believe it's been nine years since the Y2K scare... lol

Posted by Artist - David Lemon at 6:17 PM No comments: